C# 7 added some new features with a focus on code simplification and performance. This post explains C# 7 new features

We now have binary literals like 0b followed by 0’s and 1’s; literals can often get longer so you can add underscore to separate them as shown in above screenshot.

One of the major features of the C# 7 is Tuples. Assume you have Tally function to compute sum and count for the numbers you supply. We want to have two results from the function. Using Tuples you can declare Tally function as follows 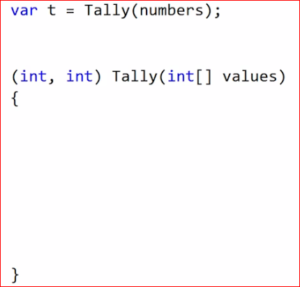 The return type in above function is tuple type with two other types in the parenthesis. The real implementation of the above method is as follows 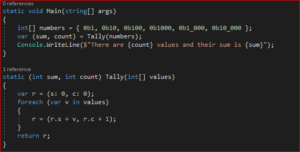 Above method loop through the all values and each time around it updates the result tuple in r. Tuples are structs i.e. value types and they are created locally and passed by copying the content. Tuples are in fact mutable and elements are simply public mutable fields.

Add method is inside your Tally method. This is called local function because it has access to all local variables of the enclosing scope and it can be used inside the scope it is declared in.

Patterns are new kinds of construct in C# that can be used to testing the values in various ways. Among other places patterns can be used in if expressions.

Patterns can also be used in switch statements, now you can switch on anything J itâ€™s no longer limited to primitive types.