the same can be written in WebForms view as follows

An explicit expression in Razor can written to avoid the ambiguity. If you want to display @ sign then you can escape the sign with @@ sign. All Razor expressions are automatically HTML encoded.

Razor also supports the code blocks like @foreach(var item in catalog) and this will automatically transition to markup. The same code block in Web Forms view engine looks as below

If you want to display some text that you do not want to be HTML encoded then use HTML.Raw method

Commenting a block of code and markup in Razor

The same can be written in Web Forms as below

Layouts in Razor are like Masterpages in WebForms which maintains the consistent look and feel across multiple views in your application. The sample layout that comes with ASP.NET MVC project looks as below 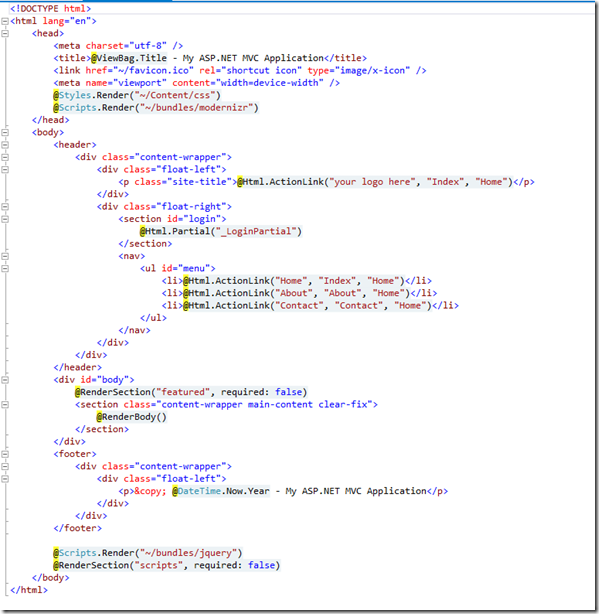 It contains a placeholders for displaying the content by other views in your application. The call to @RenderBody in above view is a place holder for other views. Multiple views can use this layout. Example of using a layout for view is shown as below

A layout can have multiple sections as in the above view, By default every view must supply the content for the section defined in the layout. RenderSection method has a overload where you can specify whether it is required or not like below

There is a file _ViewStart.cshtml that comes with ASP.NET MVC project where you can define the common view settings. The code within this view file is get executed before any other view in the folder.