A year ago .NET Framework 4.5 was released which allows the developers to use Windows 8 technologies and windows runtime directly from .NET 4.5. More on .NET FW 4.5 features can be read here.This post outlines the new .NET 4.5.1 features which mainly focusing on developer productivity, application performance and continuous innovation.

you can now inspect a return value of a method using $ReturnValue in Immediate Window. You no longer to use a temporary variable to hold the return value to inspect.

With .NET 4.5.1, you have the ability to essentially retry automatically if the database connection on cloud goes down. The real benefit is , developer no need to write any code or configuration changes other than installing .NET 4.5.1. It just works!!

A number of features added on performance front, one of that feature is

This feature is shipping with IIS 8.5 in Windows Server 2012 R2 Preview. For example if you are hosting multiple websites on a server and if any of the sites not being used for certain period of time then essentially using ASP.NET App Suspension feature you can save the application state to disk. When the request come in to the server it serves the request without re-spinning the ASP.NET worker process.

Multicore JIT is a great new feature in .NET Framework 4.5. Multicore JIT parallelizes the some of the JIT compilations that happens on the start of the application more on this topic can be read here. Now it supports for ASP.NET sites automatically and there is 15% improvement cold start up in .NET Framework 4.5.1. This feature is automatically applied whenever you create a new ASP.NET project in Visual Studio 2013. 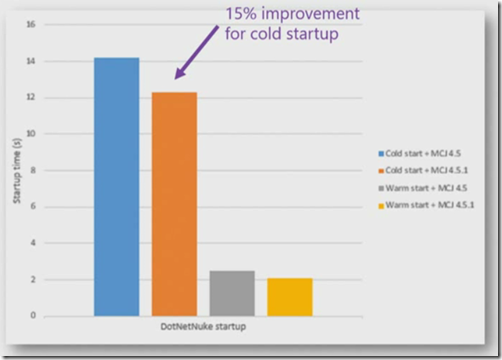