This post speaks about the future of C# which presented by Anders Hejlsberg chief architect of C# at PDC 2008. The coming version C#4.0 is much concerned on introducing Functional and Dynamic programming language concepts into the C#. It also speaks about C#4.0 features. 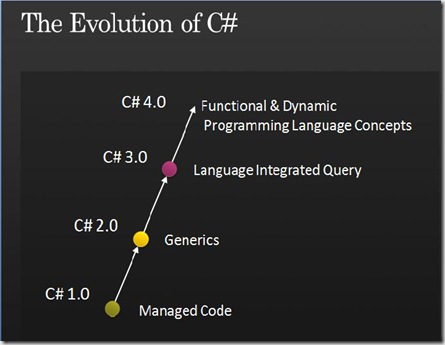 The factors that shape the C#4 are

Example Let say we are writing a program for sorting some data in memory by  looping up in dictionary and setting a for loop for completing the logic. By the time this program compiles the JIT compiler has no choice it has to execute the statements step wise as we wrote. There is no way for JIT compiler to automatically paralyze the execution of the program.

Instead if you write the program in higher level example in LINQ then there is a better chance for JIT compiler to execute them in parallel.

It introducing the features like in dynamic languages [ruby,python] such as implicit typing and meta-programming. 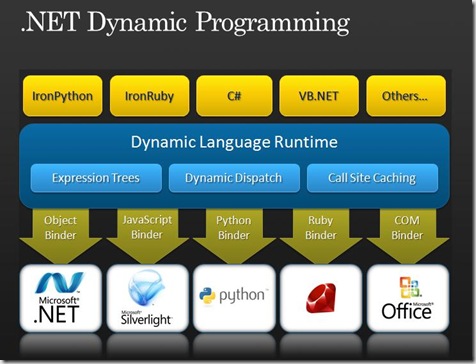 DLR Dynamic Language Runtime is a technology which unifies the Dynamic  Programming on .NET platform. It is an extension of CLR and it on top of  CLR.    It has the core capabilities like expression tress, Dynamic Dispatch and Call Site Caching.

It has Object Binders to talk with technologies .NET,silver light,python and ruby.

DLR giving you single programming experience by allowing you to talk with all other environments  shown in the above figure.

The above code snippet is having Calculator class which is statically typed one. We have a method GetCalculator() which returns of the type Class Calculator. It is having add method which produces the SUM of two numbers.

Now let say that Calculator class which not written in .NET and it is in some programming language like ruby,python or assume it is a COM class.

If the Calculator written in Java script then we may need to write the following code to use the class.

There is no unification in programming and we writing different syntaxes for getting the same result.

With C# 4.0 it possible to write the following code for unification of the programming.

anything can be assigned to dynamic as shown in below 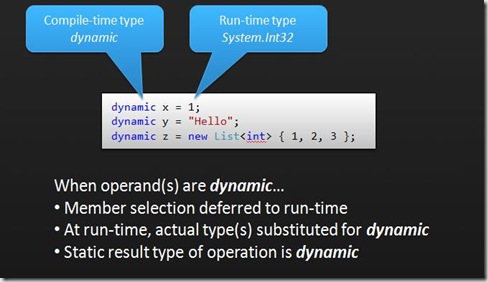 You can declare variables of type dynamic and it is just like object and at runtime it determines the actual type assigned to it. Similarly the result is also of type dynamic.

Let us take a practical example to explain how dynamic works

We are looking Math class in System which contains an overload method absolute for variety of types. 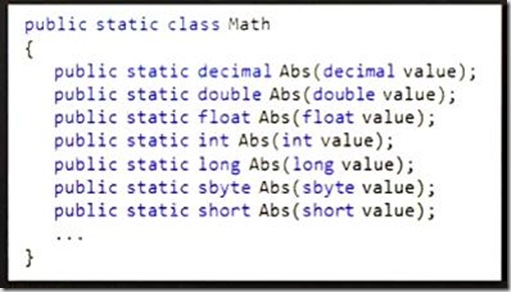 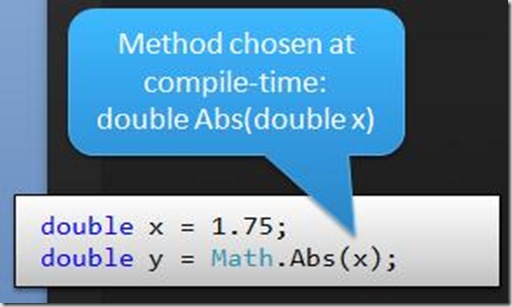 It resolute the method at runtime.

In the next article I will explain the other features of C# 4.0.