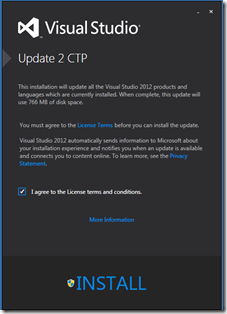 The features in this update are

A stub replaces another class with a class that implements the same interface. In order to use stubs, components in your application has to implement interfaces.

A shim modifies the compilation code of your application at run time, it runs the shim code that your test provides.

The new tool HTML and JavaScript UI tool can be accessed from Visual Studio Debug â€“> Visual Profiler. This tool helps the developers to identify the latency problems and UI un-responsiveness.

Web based test case management was introduced in January CTP and now pausing and resuming the test cases are added in this release. If you edit the test case while paused then it remembers and resumes the initial version that was paused.

Reusing the test cases is possible with this release and is useful for testing teams.

In Visual Studio update 2 , you can save helpful diagnostic information from machine being tested.